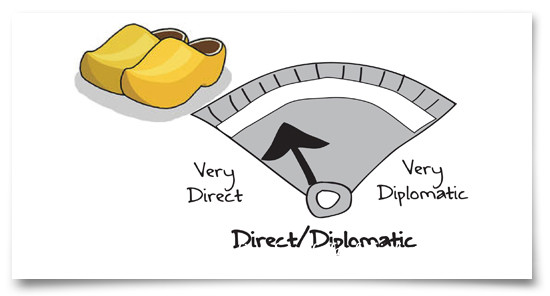 I remember the first time I fell in love with The Netherlands. I was ten years old, my father had bought me an encyclopedia set, and one of the books was about People of The World. Under The Netherlands, there was a photo of a young girl, arms wide spread as she rode a unicycle next to a canal. The book said the Dutch were the tallest people in the world, they loved their milk, cheese & mustard and had miles upon miles of beautiful tulip fields. What a magical land for a ten year old to dream of.

Years later when I moved to the The Netherlands, I realized the book was pretty accurate. But there were things the book didn’t mention, things you’d only learn living with the Dutch. And one of them is the famed ‘Dutch Directness’.

Yes, a lot of foreigners struggle with it. Netherlands is a melting pot of myriad global cultures, and some find directness inappropriate. But living here and giving talks, workshops & consultations to Dutch organizations, I realized that directness done right, is a powerful tool to learn from.

If you’re someone who struggles with confidence and authority in your speaking, then Dutch directness is your friend. Here are three important lessons to learn that’ll turn directness to your advantage.

Be honest. The Dutch don’t believe in beating around the bush. They value honesty over everything else. If you’re trying to tell (or sell) something, don’t waste time on building airy lofty dreams. Give a crisp introduction and Get.To.The.Point. I’ve noticed that a Dutch audience will decide right at the start, whether they connect with you or not. If you’re real and it clicks, they will give you all their trust, patience and be the best client you could have. Whether in a board room or on stage giving a talk, instead of cushioning facts and hiding problems, tell them what the problem is, and then show the path and solution ahead. It will earn you tremendous trust.

Embrace giving feedback. Giving feedback can get tricky, many are either too uncomfortable to ‘hurt’ the listener, or too harsh and offend them. However, the way you give feedback and make people feel is a crucial element of your leadership capability, and whether people around you will value and respect your word. Feedback done wrong can be costly for the company- negative relationship with managers is one of the biggest reasons for promising employees leaving their jobs. Over the years, I noticed how the Dutch balance long-term professional relationships alongside being direct, and the trick is: Be factual, don’t get personal. This allows the receiver to understand the issue at hand, that it can be fixed and there’s no bad blood between them. By being factual and away from personal attacks, you’ll be able to establish yourself as a leader whose words command respect.

Be light-hearted. One of the most enjoyable qualities of the Dutch, in my opinion, is how happy they are to pull your leg, and their own. Dutch directness comes with a big dollop of humour, and when done right, is a sure-shot way of warming your audience and making them relate to you. Note- don’t go overboard with pulling people’s leg and becoming rude, that destroys relationships. Measure your words well. Last year at a major life science event I hosted, the keynote speaker who was the CEO of a highly successful biotech firm, talked about the the time he couldn’t get through an interview, the hilarious (in retrospect!) mistakes he made with his team back in the day, and didn’t shy away from some light-hearted leg pulling of the pharmaceutical companies in the hall. It was funny, real, just enough and made him that much more endearing. He not only gave us an enjoyable speech, but stood out with his light-hearted camaraderie.

Dutch Directness is a double-edged sword, and soon I’ll write on how this directness can be made more nuanced, effective and motivating, but today we look at the brighter side. 3 simple tips from Dutch Directness: Be Honest, Embrace Giving Feedback and Be Light-hearted. Include them in your dialogue moving forward, and it’ll polish your communication and earn you great respect by peers and leaders. If anything, let this post motivate you to embrace the genuineness of the Nederlanders in your public speaking.

What do you feel about Dutch directness, do you have more recommendations for improving public speaking? Please share your thoughts in comments below, as I enjoy learning from you too.

Chosen by VIVA Magazine as one of the 400 most inspiring women in The Netherlands, Sangbreeta Moitra is an international award-winning keynote speaker on personal and organization transformation of presence, legacy and  customer connection. She won the TEDxRotterdam jury award in 2017 for her speech ‘Transform Your Presence‘, and is the Dutch Champion and European Bronze Winner in public speaking championships in 2013/2014/2017. With a client list including Shell, Orange, Ernst & Young and Booking.com, she gives talks and workshops at top organizations and conferences across the world. Would you like to know more? Contact her at info@sangbreetamoitra.com and visit SangbreetaMoitra.com . Watch her TEDx award-winning speech below.